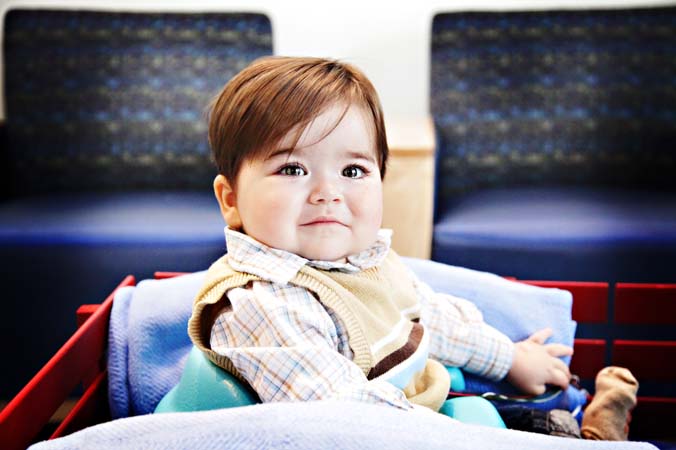 
Holden's days were documented in such detail (a fact that I'm sure would have embarrassed him greatly had he made it into his teenage years), but Carter has never had the same honor. He may not face the same journey as his brother, but it's a journey all the same. I'd hate for him to think that we didn't record anything about his first year on the planet, so here's a post all about Carter. :)

We'll start with the vitals: He is a little over twenty pounds and almost thirty inches long. His head is HUGE- above the 95th percentile. (This has earned him the nickname of Charlie Brown. :)) He has eight teeth, all in the front, and his canines and molars are on their way.

Our sweet little boy has found his voice! After months of being the quietest, sweetest baby ever, he has recently developed a mind of his own. He's still pretty sweet, but he knows what he wants now, for sure. In fact, one of his favorite words is DAT! As in, "I want DAT! Dat! Dat!" All day long, every day, he wants DAT. It would be maddening if it weren't so stinking cute. His other words include mama, dada, hot, dog and bah (bye?).

Most moms are biased, but I really think my baby is a genius. :) He will point to just about anything you ask him. He knows where my nose, ears and mouth are located, and he has already figured out the "Work smart, not hard" philosophy. Of course, that intelligence makes him a little harder to parent, since he seems to be a step ahead of us most of the time, but I hope he keeps that curiosity and quest for knowledge throughout his life.

He's taken a few faltering steps on his own, but he's still mostly content to army crawl his way through the house. He pulls up on anything that stands still, but he's scared to let go to walk. In fact, the only way he'll walk is while holding on to two adult fingers. Not one, but two. He's quite adamant about needing them both, and will plop right down on his little butt if one finger is taken away. One of these days, maybe he'll realize that he doesn't need the safety net. :)

Of course, he may not see the need to walk just yet. His army crawl is quite efficient- and pretty darn cute, too. He is crazy fast, especially if he hears a door open. One of his favorite activities is opening and closing doors.

Crawling has also given him new opportunities to stuff his face with anything he can find on the floor. He's a little Hoover! He can spot the tiniest speck of something on the floor, and it's in his mouth before I know what's happening. I've lost count of the number of times I've said, "That had better be a puff!"

Another favorite thing to do is play with balls. Any shape, size and color- He loves them all! He already has quite the pitch, and I'm hoping he continues to develop that into a professional baseball career. Mama can dream, right??

He's obsessed with feet- his own and everyone else's, too. (God must really have a sense of humor, because I can't stand the nasty things!) We can't keep shoes or socks on him, even when it's freezing cold outside. Somebody should invent some kind of sock that can't be pulled off by a baby's determined little fingers- that person would make a fortune!

Carter is really into Mickey Mouse Clubhouse these days. He'll crawl across the house as fast as he can move those little arms when he hears the Hot Dog Dance start playing. His other favorites include anything musical and (inexplicably) the Empire commercial- apparently, that jingle is irresistible to babies. (You just sang it in your head, too, didn't you?)

Like most babies, he loves to empty things, but isn't so much interested in putting them back where they belong. It's not unusual to find a case of soft drinks rolling around on the floor, or to find an entire stack of paper plates strewn across the kitchen. I could probably avoid the messes, but I like to pick my battles. If it's not a danger to him, I usually let him explore.

Keeping him occupied while cooped up inside has proven to be a challenge. Thankfully, living in Texas means that we occasionally get a break from freezing temperatures in January, and we take full advantage of the perfect 72 degree days. He would still live outside, if we'd let him.

Mealtimes have also become more challenging. Carter would eat anything I spooned into his mouth for his entire first year. Some switch flipped on his first birthday, and now his palate is a bit more discriminating. He continues to love oatmeal, puffs, cheese and yogurt, while new foods are met with a closed mouth. He takes after his Mama in the texture area, and won't pick up anything that has a weird texture. (This aversion does not, however, apply to things found on the floor. I don't understand how that works.) That means most finger foods are out, but we're still working on it. I might still be feeding him when he's ten, but that's okay. He's worth it. :)

All in all, Carter's first year has passed by in a joyful blur. He's mellow, happy and full of personality. If all babies were as easygoing as him, I'd have a million of them. (Or not- they're expensive little creatures!)

I'm soaking in all of the slobbery sugars I can, because I know that these days will be nothing but a memory before I know it.

I am so thankful for that hard-earned knowledge- I know that none of these days are guaranteed. I know now to treasure each and every day while we're still living in it.

We are so thankful for our Carter. Our stinkbug. Our rainbow after the storm.

Here I am, once again, ready to pour my heart out on the pages of a blog. I'm drawn here again tonight when my heart feels too fragile to do anything else. This blog is one of those tiny connections to my Holden that I can't seem to let go.

Some days, it's all I can do to keep the smile plastered on my face.

We bought Carter's first shoes this week, and I had no idea how much that would break my heart. It should be one of the happiest rites of passage in a child's first year, and I just want to cry because Holden never had a pair of shoes. He went into the hospital before he ever needed them, and we never thought to buy any. Just one of my many regrets, I suppose.

Holden celebrated his first birthday on the 8th floor of CMC- Carter will be celebrating his this weekend at home. Carter is already in size 4 diapers, and Holden never made it past size 3. Carter weighs more now than Holden ever did. The comparisons are endless and so unfair. These may all seem like such small, trivial things, but part of my heart is a little bit shattered knowing that Carter is already bigger than Holden ever had the chance to grow.

I'm so very thankful, yet still reeling at the unfairness of it all.

It seems harder to hold it together this time of year, because I'm constantly torn. Carter celebrated his first Christmas, and the girls were spoiled rotten by an enormous family who all love them dearly. I am overjoyed by how much love my children have surrounding them. We are all healthy and whole and loved, and I should be thankful for every one of those blessings- yet my heart aches for the blessing taken from us too soon.

This was the second Christmas celebrated without Holden. The second one was worse than the first, I think. The first was so painful, but still so new. I kept thinking I would be okay if I could just get through it all. This year has been so much harder, because it's sinking in that this is a yearly thing. This is forever.

I've been struggling this holiday season, even as my blessings seem to multiply each day. I'm crying more often. I'm not sleeping well. I'm having bad dreams- those dreams- almost nightly, and I wake up aching so much for a little boy who exists only in my dreams and memories now. I will always and forever want more.

Most of Holden's first and only Christmas keepsakes are packed away in his box, but I faithfully hang his stocking each year. Each year it remains empty. It's such a tangible reminder of the tremendous loss that we live with each and every day. His Christmas things should be in his stocking. Not in a box.

My heart goes out to every parent who has had to put their child's life in a box.